An event will be held in Chicago Dec. 12 in conjunction with the release of the book of Joe Hill’s writings, The Letters of Joe Hill. (Copies are available from us) And an Exhibition on the life and legacy of Joe Hill continues at the American Swedish Historical Museum, Philadelphia.

Several media outlets ran articles on Joe Hill in conjunction with the 100th anniversary of his judicial murder, including:

IWW members marked the centenary of the execution with a vigil in Salt Lake City and soapboxing across the United States.  Here are two photos from Albany, New York: 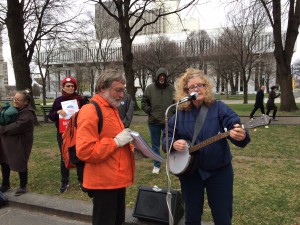 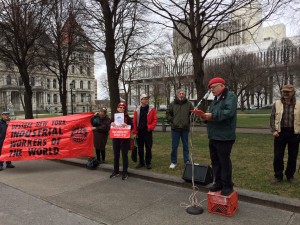 One reply on “Joe Hill presentation in Chicago”

Bucky Halker, Chicago musician, singer-songwriter and Labor Historian, will also be performing songs from his recent release “Anywhere But Utah: Songs of Joe Hill” at the event. Alexis Buss also designed the CD cover for this album.