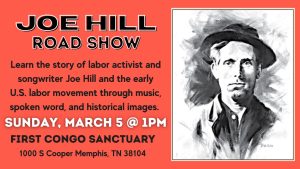 Shelby Bottom Duo invites you to attend a free performance of their acclaimed show “A Musical History of Joe Hill & the Early Labor Movement,” Tuesday April 25, 11 am at the UAW hall, 6207 Centennial Blvd in west Nashville, Tenn.

Nashville-based Shelby Bottom Duo (Michael August and Nell Levin) will perform their entertaining, multimedia educational show, A Musical History of Joe Hill and the Early Labor Movement in Louisville April 7. The show is set for 7 to 10 p.m. at Lettersong, 1501 Story Ave.

Tickets are $10 advance, $12 at the door. Space is limited so advance tickets are recommended. Click here for tickets.

Songwriter Joe Hill is the precursor of Woody Guthrie, Pete Seeger, Bob Dylan and Bruce Springsteen. He was immortalized when Joan Baez sang “I Dreamed I Saw Joe Hill Last Night” at the Woodstock Festival in 1969. A Swedish immigrant, Hill was a member of the international labor group, the Industrial Workers of the World (IWW or Wobblies), active in the decade leading up to World War I. In 1914, Joe Hill was framed for two murders he did not commit. He was executed by a firing squad in Salt Lake City, Utah on November 19,1915. He subsequently became a labor icon.

Our Musical History includes live performances of Joe Hill songs along with a talk and images about Hill’s life, early labor struggles and the influence of the IWW’s innovative organizing strategies on movements today. Our goal is to share this vital slice of labor history with a wide range people so that we can all better understand why the revolutionary creativity exemplified by Joe Hill and the Wobblies is still relevant. In 2015, 100 years after Joe Hill’s execution, 40 concerts were held around the country celebrating his legacy. Shelby Bottom Duo organized and performed at the Nashville concert and performed at the Knoxville concert.

A Musical History has received funding for our performances from Metro Nashville Arts Commission THRIVE and Humanities Tennessee.

This week marks the final week leading up to the 100th anniversary of the judicial murder of Joe Hill.  The New York Daily News just run an article, as did Capital & Main, and the Salt Lake Tribune continues updating their Joe Hill page.  And you might like to check out Joe Hill’s Living Message…

There are many, many events scheduled for the week, and we keep learning of new ones every day. And we know there will be soapboxing in many locations. Here’s a breakdown of events, organized by state:

Australia: The New South Wales Teachers Federation is hosting a forum on the occasion of the centenary

Bo Widerberg’s film Joe Hill will be shown in a newly restored and digitally remastered version produced by the National Library of Sweden as part of a Joe Hill Centenary event in Melbourne, Australia, on Thursday, Nov. 19. Victorian Trades Hall, Lygon and Victoria Streets,  Carlton, commencing at 5.00 p.m.

Pennsylvania: Former IWW General Secretary-Treasurer Alexis Buss will discuss the life and legacy of Joe Hill, and in particular his writings collected in the new edition of The Letters of Joe Hill (for which she collected extensive new material and updated and expanded the notes). John Braxton will sing Joe Hill’s songs. Thursday, Nov. 19, 6:30 p.m., Swedish American Historical Museum, Philadelphia.

An Exhibition on life and legacy of Joe Hill continues at American Swedish Historical Museum, Philadelphia, through Spring.

11/16/2015 Lecture: William Adler will speak on The Man Who Never Died: The Life and Legacy of Joe Hill After a Century, Monday, Nov. 16, 7 p.m., Dumke Legacy Hall in the Hurst Learning Center at Weber State University, Ogden; free.

A host of downloads of the soapbox action guide from the region suggest that one should be looking out for soapboxers around the state.

The southern leg of the Joe Hill Roadshow kicks off Sunday, Oct. 4 in Atlanta.