This website may go dark for a few days while we move to a new webhost. We hope to be back no later than Sept. 21. We were able to gain access to our domain registration with the assistance of a domain directory service, and have now purchased a webhosting contract with a new provider. They promise to transfer the content over soon.

For more than a year, our webhosting service (EZOS) has been refusing our requests for technical support. They have also refused to provide access to our domain registration, and the phone number and contact information available through WhoIs for the domain registrar they used appears to be bogus.

Without access to the domain registration we cannot switch to a new webhost, and so we are forced to abandon JoeHill100.com even though the domain is registered for the next several years. We expect this site will go dark at some point in September, access to its contents should be available through the Internet Archive (Wayback Machine). Alternately, you can download any files you are interested in access to so long as this site remains live. We do not anticipate being able to regain access to this domain.

Our annual labor history calendar will continue to be available through http://iwwhlf.org, and we can be contacted via email [iwwhlf at gmail.com] or by post [PO Box 42531, Philadelphia PA 19101] to order Joe Hill-related literature or other material we distribute. We regret the inconvenience, but this is an issue we have been trying to resolve for many months without success and there are no remaining options to keep the site live available.

The Joe Hill Revival musical will be performed Sunday, February 6, at 2 pm at the Triad Theater in New York City. In-person and streaming tickets are available.

“The Joe Hill Revival,” is a new musical that brings back to life the story of labor activist and songwriter Joe Hill, framed up and executed by the state of Utah in 1915. This will be an encore one-night-only performance at the Triad Theater in Manhattan on Sunday, February 6, 2-4pm. The book and original music and lyrics are by Dan Furman, with additional lyrics by Joe Hill and others. The musical is directed and choreographed by Jerome Harmann-Hardeman, with a cast featuring Laurént Grant Williams as Joe Hill and Caitlin Caruso Dobbs as Elizabeth Gurley Flynn. They are joined by Nicola Barrett, Laura Bright, Curtis Faulkner, Julia Fein, Drew Hill, Christopher Isolano and Ace McCarthy and supported by a 4-piece band.

The show was first performed at the Outdoor Patio @ Rustik Tavern in Brooklyn, Sept. 14-Oct. 6, 2021. A song from the musical is available online (as is more information on the show and links to purchase tickets) at: http://www.brooklyntaverntheater.com/the-joe-hill-revival.html?fbclid=IwAR0n0s3zf9YD16OLJJmR-fq6pWz4KEswkaMXP1FH8YtiLwMGrQ-80cNRdjY

Folksinger Anne Feeney, who was part of the Joe Hill road show in 2015, has died of Covid 19 at age 69. Feeney was a lifelong activist, a commitment reflected in her songs. After working 12 years as a trial attorney, Feeney dedicated herself to music. Her albums include “Have You Been to Jail for Justice,” “Dump the Bosses Off Your Back,” and “Union Maid.” She served a term as president of the Pittsburgh Musicians Union, and was also a member of the Industrial Workers of the World. She died February 3, 2021. 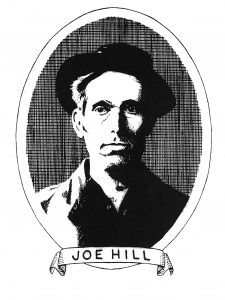 German public broadcaster SWR is airing a German-language program on its internet radio station SWR2 this Sunday: “The Ashes of Joe Hill – The Resurrection of a Legend” Sunday, December 6, 2020 2:05 p.m., SWR2 Feature on Sunday, https://www.swr.de/swr2/doku-und-feature/die-asche-von-joe-hill-swr2-feature-am-sonntag-2020-12-06-100.html?fbclid=IwAR2c-eQ-7tx4rVEiekdkY0Zj61r7PFuy3Sygi6IcAKhwARs4dYB-RBOTkxI

British musician Holly Carter held a live online talk on the anniversary of Joe Hill’s murder by the state of Utah. She sings a few Joe Hill songs during a longer discussion of his life and influence: https://www.facebook.com/hollycartermusic/videos/162897875541834 It’s worth a listen, though she does slip up a few times – alternating between International and Industrial Workers of the World

Joe Hill’s songs fanned the flames of discontent in the early 20th century, becoming anthems of the Industrial Workers of the World labor union. Hill was executed in 1915 for a murder he probably did not commit, but his music has lived on to influence generations of social and political protest music.

Featuring the Shelby Bottom Duo and Q&A with faculty from the Divinity School, and Departments of History and Sociology.

Light refreshments will be served. The event is free and open to the public. Closest parking is Wesley Place Garage.

Co-sponsored by Vanderbilt Department of Sociology, Divinity School, Department of History, Program in American Studies, and Blair School of Music’s Department of Musicology and Ethnomusicology. Special thanks to the Tennessee Arts Commission.