We have a wide array of Joe Hill and labor-oriented material suitable for gifts, including:

Joe Hill’s letters and other writings

the definitive biography of Joe Hill, by William Adler  (the site lists it at full price; we have a large quantity of discounted copies arriving shortly which will be available in quantities of 3 or more at very attactive prices; drop us a line at iwwhlf@gmail.com if interested)

of The IWW in Its Heyday, will be speaking about the book at three East Coast events. 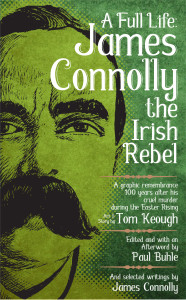 “It is good to see this graphic account of the life of James Connolly, the socialist and fighter for Irish freedom who also defended the rights of women to revolt. He was one of the inspirations in the late 1960s when early women’s liberation groups started to form. His ideas are as needful today as they were in the twentieth century.”

May 1916 marks the centenary of the execution of IWW/labor organizer James Connolly by British authorities for his part in leading the Easter Rebellion. The IWW Hungarian Literature Fund is commemorating the occasion by publishing, in collaboration with PM Press, a graphic history of his life by veteran comic artist Tom Keough, followed by a modest selection of Connolly’s writings and an afterword by labor historian (and editor of the graphic history The Wobblies) Paul Buhle.

Copies of the 42-page pamphlet A Full Life: James Connolly the Irish Rebel are available for $4.95, or three for $10.00, post-paid to U.S. addresses. (Inquire for international postage)

To order, click here or visit our Shop page.

“Tom Keough and Paul Buhle have put together a terrific graphic remembrance of a giant among working class heroes: James Connolly.  I hope that it will serve as an introduction to many, and foster a greater understanding of the depth and intensity of Connolly’s contributions to the labor movement and socialism.”  — Anne Feeney

There are a number of online collections of Connolly’s writings, including:

The full video of the New School event on The Letters of Joe Hill is available at https://www.youtube.com/watch?v=VowR8RpYjoA

The Graphic History Collective held a Joe Hill coloring contest (the deadline for which passed before we learned of it). However, there is a free commemorative coloring poster available for download.

Paul Buhle reviews The Letters of Joe Hill and the reissue of Franklin Rosemont’s Joe Hill (a wide-ranging exploration of his legacy and influence).

Dissent magazine’s podcast features an interview with Letters of Joe Hill co-editor Alexis Buss, and some Joe Hill songs (at the 10 minute mark)

A collection of articles on the trial (1914) from the Salt Lake Tribune is available as part of a rather hostile website.

November marked the 100th anniversary of the execution of IWW organizer and songwriter Joe Hill, an occasion that has been marked by the release of a new edition of his writings, an international labor conference in Sweden, a trilingual compilation of art and music he inspired, museum exhibits, and countless performances. Most readers will know Joe Hill’s music through folk performances by Utah Phillips and Joe Glaser, or perhaps Hazel Dickens’ rendition of “Rebel Girl.” Everyone has heard “The Ballad of Joe Hill,” transforming Joe into a dreamy Popular Front icon. And a few years ago William Adler brought the historical Joe Hill back into focus with his superb biography (reviewed in ASR 57).

I have heard a great many performances of Joe Hill’s songs over the past year, and have come to believe that even his weakest songs can be powerful when performed with conviction. Magpie’s version of his “Don’t Take My Papa Away From Me,” written on the eve of Hill’s execution, as the U.S. was being drawn into World War I, brings new life to what is generally viewed as an overly sentimental song – not only proof that Hill remained engaged with the class struggle up to the very end, but also moving in its own right. J.P. Wright’s powerful rendition of “We Will Sing One Song” completely transformed my sense of the song. And of course the converse is also true – at one event I heard a rendition of “There Is Power In A Union” that evoked all the angst and weakness of contemporary business unionism.

John McCutcheon’s “Joe Hill’s Last Will” includes 13 songs, beginning with “Casey Jones” and ending with “There Is Power.” It includes two songs that, to the best of my knowledge, have never before been recorded: “What We Want” (to my mind one of the strongest tracks) and “Overalls and Snuff,” written on the 1,000-mile picket line. “Stung Right,” a lesser-known song about the miseries of life in the Navy that I first heard sung by Ewan MacColl, also gets a strong performance. Joe Hill fans will certainly want a copy, but many of the performances lack conviction, relying instead on lavish production to carry songs perfectly capable of standing on their own if given half a chance.

Bucky Halker’s “Anywhere But Utah” also includes several never-before-recorded Joe Hill songs (“Scissor Bill,” “Come and Take a Joy Ride in my Aeroplane,” “Der Chief of Fresno,” “My Dreamland Girl,” “Nearer My Job to Thee,” “Let Bill Do It, and “It’s A Long Way Down to the Soupline”), among 18 tracks (and three archival segments) that also include standards including “Ta Ra Ra Boom De Ay,” “The Preacher and the Slave,” “Mister Block,” “The Rebel Girl” and a rocking rendition of “There Is Power in the Union.” Hill’s rarely recorded anthem “Workers of the World Awaken” (which has some great poetry that powerfully captures the IWW message, but does not sing very well) is also present, but sung in Swedish translation. (Two other tracks interpolate Swedish and English.)

“Anywhere But Utah” comes with a 20-page booklet that includes extensive notes (and lyrics) for each song, offering a quick overview of Hill’s music and his contribution to labor songs. The complete text of Joe Hill’s surviving songs and writings is included in the re-issue of The Letters of Joe Hill, providing clear evidence not only of Joe Hill’s wit, but also of an optimism that is often overlooked. In Joe’s “Soup-line,” for example, the workers quickly tire of the watery soup and other indignities visited upon them, organize to take control of the industries, and implement the four-four day; by song’s end, the soupline is frequented by the former bosses, who subsist as always on the workers’ charity, but no longer so ostentatiously.

Halker brings a sense of commitment to the songs, even as he re-imagines several of them. This is a Joe Hill inflected with ragtime and vaudeville (the popular music of his day, and which he borrowed several tunes from), but also with blues, jazz and rock. A couple of songs seem self-consciously old-timey, and I would have welcomed an English-language version of “Workers of the World Awaken,” one of the songs Joe Hill wrote from death row. But overall, this is an album that takes Hill seriously as a musician, and which will reward repeated listening.

The Letters of Joe Hill adds several letters unavailable when the first edition was issued and greatly expands the explanatory notes. Several articles by Joe Hill are also included, showing his concern with police brutality and the need to organize women workers, but also an intensely practical turn of mind. Joe dismisses the idea that workers can secure their rights through armed struggle, for example, not on ideological grounds but through a discussion of the enormous sums of money that would be required for armaments. Direct action at the point of production, he notes, is more effective, cheaper, and results in no loss of human life. There is no attempt at a full biography here; but by collecting Joe Hill’s writings (articles, letters, poems and songs) and cartoons, Alexis Buss and Philip Foner do much to fill in the contours of Hill’s life and the commitments to which he dedicated his life.

Joe Hill embodies the self-taught working class activist-intellectuals who built the radical labor movement. His songs continue to speak to us a century later, about direct action, the need for solidarity, and the enormous power always in our hands, should we organize to use it.